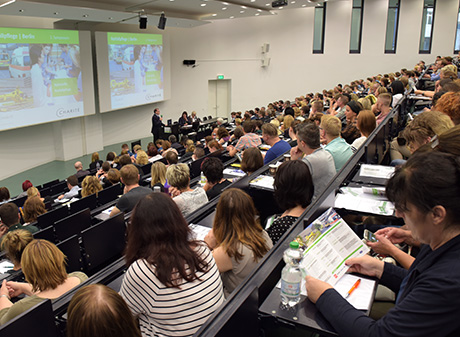 Tim Hunt | A Life in Science: Stumbling on the Secret of Cell Division

2001 Nobel Laureate in Physiology or Medicine

The Nobel Prize Inspiration Initiative (NPII) is a global programme designed to help Nobel Laureates share their inspirational stories and insights. By taking Nobel Laureates on visits to universities and research centres around the world, and by capturing their thoughts on video, the Initiative seeks to bring
the Laureates into closer contact with the worldwide scientific community, and especially with an audience of young scientists.
The Initiative is organised by Nobel Media, the company managing media rights for the Nobel Prize, in partnership with AstraZeneca.

The Nobel Prize Inspiration Initiative would like to thank the Charité Comprehensive Cancer Center, Charité – Universitätsmedizin Berlin for hosting the event.

Please note: during today's event photos and/or videos will be taken which may be published in various media in reports on the event or general PR material.

Tim Hunt | 2001 Nobel Laureate in Physiology or Medicine
Tim Hunt is an emeritus 'Principal Scientist' at The Francis Crick Institute, London, and a visiting researcher at the Okinawa Institute of Science and Technology (OIST) in Japan. He was born in 1943 and grew up in Oxford until moving to Cambridge to read Natural Sciences in 1961. He did his PhD in the Department of Biochemistry entitled "The Synthesis of Haemoglobin" (1968).

Dr Hunt spent almost 30 years based in Cambridge, at first working on the control of protein synthesis, with spells in the United States; he was a postdoctoral Fellow at the Albert Einstein College of Medicine from 1968–1970 and spent summers at the Marine Biological Laboratory, Woods Hole, from 1977 until 1985. In 1982, he discovered cyclins, which led to a share of the 2001 Nobel Prize in Physiology or Medicine, with Lee Hartwell and Paul Nurse, "for their discoveries of key regulators of the cell cycle".

Dr Hunt has written two books, "The Cell Cycle: An Introduction" (with Andrew Murray) and "Molecular Biology of the Cell: The Problems Book" (with John Wilson).
Dr Hunt has served on numerous scientific advisory panels, and on advisory boards of laboratories across the world. He chaired the Life Sciences Panel for selection of European Young Investigators, and was chairman of the council of EMBO. He was a member of the Scientific Council of the European Research Council (ERC) and of the Board of Governors of OIST.

He is married to Mary Collins, who is Dean of Research at OIST, and they have two children.